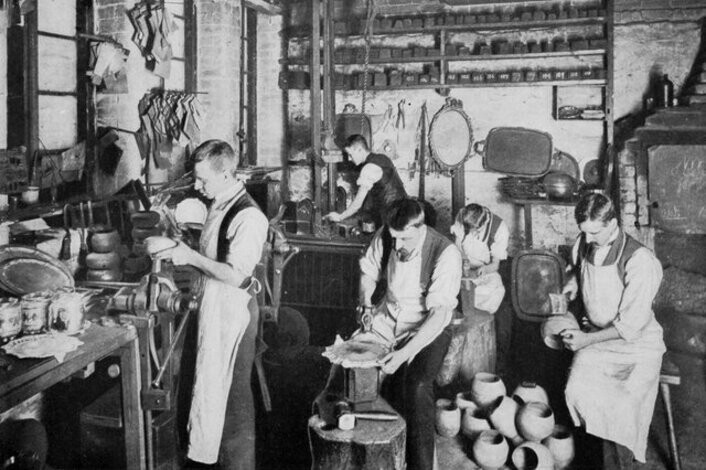 Roberts and Doré has a distinguished pedigree dating back to 1908 when Tom Roberts, a respected figure in the City of London, wanted to realise his dream of becoming the finest silversmith in the capital.  So, with his business partner, James Dore, they founded Roberts and Dore Ltd as manufacturing silversmiths and cutlers. Gathering some of the best craftsmen in the country, Tom and James took on extensive premises in London’s Hatton Garden and founded factories in Sheffield and Birmingham. The company’s reputation soon grew and became established as having the finest silver showrooms in London.

The business was an immediate success.  Tom’s renowned refusal to compromise on quality and design soon saw his craftsmen supplying the top London stores and his pieces were exported throughout the World, including special commissions for international royalty, and many governments. He was also responsible for producing a special trophy for the American Kennedy dynasty. Roberts and Doré continued to flourish through three generations of the Roberts family and two World Wars, when its expertise was harnessed in supplying cutlery and food containers to the armed forces.

As late as 1990, Roberts and Dore were appointed as exclusive silversmiths to The Royal Guard of Oman, following completion of an extensive contract to supply silverware to H.E The Sultan of Oman’s Officers Mess. They were also commissioned to produce two exact replicas of the “Calcutta Cup” which reside in Murrayfield and Twickenham rugby grounds.

Roberts and Dore continued to flourish through three generations of the Roberts family. Trevor, Tom’s son joined in 1926; Henry and Kim, Trevor’s sons joined in 1958 and 1968 respectively.

In 2008 - exactly 100 years after the birth of Roberts and Doré - the Roberts family designed a special collection of fine sterling silver, silverplate and rich traditional leather accessories, and with advances in technology they continue to design and produce a fine collection of sterling silver and silverplated gifts, keeping alive Tom Roberts’s proud tradition